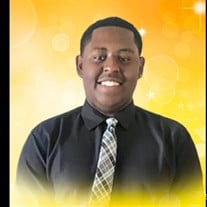 ALDOUS LYSANDER HARRIS was born January 23, 2004 in Indianapolis, IN. Throughout his childhood he was affectionately known as “Butt Butt” but as he got older he made it clear that he had outgrown that nickname; he grew to prefer to be called “Al”. As a young boy, Al was comical, always laughing and making others laugh. You could always catch him smiling or annoying others for fun. Al was always outgoing and social, making friends easily and being sure to stay connected to his family and friends. Al professed hope in Jesus Christ early in his life and enjoyed attending church services with his “Maw Maw” throughout his life. Even as a young child Al was not ashamed to sing and yell praises during worship. Al loved to cook (especially seafood boils), sing, act, dance, skate, laugh and to make others laugh. He was independent, eager, and incredibly audacious. As he transitioned into adolescence, Al and his family moved to Phoenix, AZ, where he quickly and naturally expanded his community of friends and social involvement. During this time, he held jobs at McDonald’s, Portillo’s, Quick Trip, Jimmy Johns, and his high school cafeteria. He was often favored by his employers because of his commitment and work ethic. Al’s loud and boisterous spirit led him to activism and he cofounded Phx10 youth activist group where he helped to organize and lead protests against racial and social injustice in the Tempe and Phoenix communities. He joined the Activism Ministry of Black Lives Matters Phoenix Metro, and was described as “a bold leader” who “wished and worked for a better future.” At the time of his death, Al was a senior at McClintock High School in Tempe, AZ and was active in student council, Black student union, speech and debate, theatre, choir, and marching band. Al was embedded in the arts and was known for adding humor to his roles in school plays, singing ballads, posting singing and dancing videos on social media, and creating content for YouTube. Al had just begun the process of applying for colleges, targeting historically Black colleges and universities, where he hoped to continue his involvement in theatre or to ultimately become a mortician. On Monday, October 25, 2021, at the tender age of 17 years and 9 months old, Al departed this earth and went home to be with the Lord. He is already incredibly missed, but we take comfort in knowing that Al is now singing in the Lord’s choir. He leaves to cherish his memory: his mother and stepfather, Keona and Dajuan Moore; father, Aldous Harris Sr.; siblings, Keyon Harris, Kameron Jordan, Tracheal Mckinnion, Emmanuel Harris, Alyssa Harris, and August Harris; grandparents, Charles Jordan, Jr., Carolyn Williams, Patricia Harris, and Vanessa Moore; great grandparents, Charles and Olivia Jordan; aunts, Kesha Harris, Ashley Jordan, Kory (Kevin) Carey, Kierra Jordan, Jasmine Stewart, and his favorite aunt Kila Grady; close cousin Fredasha Hudson; uncles, Dana (Kendra) Hazelnut, Tyree Jordan, and Tylin Jordan; and a host of great aunts and uncles, cousins, and friends.

ALDOUS LYSANDER HARRIS was born January 23, 2004 in Indianapolis, IN. Throughout his childhood he was affectionately known as &#8220;Butt Butt&#8221; but as he got older he made it clear that he had outgrown that nickname; he grew to prefer... View Obituary & Service Information

The family of Aldous Harris Jr. created this Life Tributes page to make it easy to share your memories.

Send flowers to the Harris family.