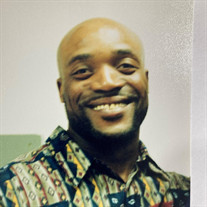 Antonio Leroy McCloud was born July 24, 1961 in Indianapolis, Indiana to Ollie B. Covington and Leroy McCloud. Antonio was known as Tony or “Frog” to his friends and Robin to his family. Antonio received his education through the Indianapolis Public School system. Before COVID-19, he worked for Miller Transportation and IndyGo as a detailer. Early in life, Antonio was a very mischievous young man. You could always find him somewhere getting into trouble. Antonio wrecked havoc at Shortridge High School in the 70’s. Antonio accepted Christ and was baptized early in life. The word says that once Antonio was in the Father’s hands, nothing would be able to pluck him from it (John 10:28-30). Because God needed to work on his child, he sat Antonio down for a while. In doing so, Antonio finished his high school education, earned his Theological degree, and gained insight into life while in the penal system. During this time, Antonio also sang in the choir. He loved listening to and singing “old skool” music. Antonio was a very neat person. No matter the circumstance, his home was always spotless and he was always well-groomed. Antonio took pride in his dress and appearance. Antonio was heavily involved in bodybuilding. His short frame and muscular physique won him numerous bodybuilding competitions. He won his first competition in 1990. Antonio was married to Jessie Simmons from 1993 to 2006. Antonio was finally blessed with children in his late 40’s. The twins, Anye’a and Antonio McCloud, were born on June 6, 2009. They were his pride and joy. He would always referred to them as his “regulators”. Antonio Leroy McCloud departed this life on August 24, 2021 at the age of 60 years old. He will be sadly missed by all who knew and loved him. Antonio was preceded in death by his parents, Ollie B. Covington and Leroy McCloud; three sisters, Vivian and Nita Covington and baby Linda; grandmother, Luevenia Steward; great-grandmother, Lucy Butler; and three nephews, Andrew Hubbard, Eric Webster, and Damon Covington. Antonio leaves to cherish his memory his beloved son, Antonio McCloud Jr.; daughter, Anye’a McCloud; brother, Richard (Patricia) Hubbard of Somersworth, New Hampshire; four sisters, Kim McCloud, Regina Covington, LaTonya Covington, and Sabrina (Timothy) Greer; one great-aunt, Lucy Butler; girlfriend Carol Sanders and a host of other family members and friends.

Antonio Leroy McCloud was born July 24, 1961 in Indianapolis, Indiana to Ollie B. Covington and Leroy McCloud. Antonio was known as Tony or &#8220;Frog&#8221; to his friends and Robin to his family. Antonio received his education through the... View Obituary & Service Information

The family of Antonio Leroy McCloud "Frog" created this Life Tributes page to make it easy to share your memories.