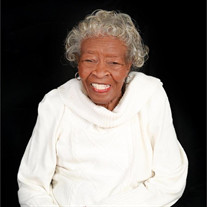 Armree Turner was born January 30, 1932 in West Point, Mississippi. She was the lovely daughter of Addie Brown and Willie Brown (deceased) and she was one of eleven children. As a young girl, she moved from her home state Mississippi to Indianapolis, Indiana. She attended Indianapolis Public Schools and graduated from Crispus Attucks in 1953. She later united in marriage to Ralph Turner Sr. and from that union, six children were born. Armree had an astonishing career working at Wishard Memorial Hospital (now known as Sidney and Lois Eskenazi Hospital). There she served as a Ward Secretary in the Inpatient Mental Health facility. She was the first person the doctor saw when entering the secure floor. She was instrumental in ensuring that the patients received the care they needed by hospital staff. She loved working at Wishard and there she found her love of poetry. Every holiday she would organize a staff pitch-in, gift exchange and would post a poem in the monthly newsletter. She established so many long lasting friendships at Wishard that she truly cherished. Armree’s closest friends were Mrs. Dorothy, Ms. LaBrentha, and Mrs. Ruth, Marion, Rosie and Collen. She gave her life to our Lord and Savior at the age of twelve years old and united with the Eastern Star Missionary Baptist Church where she was a dedicated member for over sixty years. Her most memorable service was serving as one of the original members of the Pastor’s Aide Ministry. She was proud to serve God by allowing Him to use her to support the Pastor and his family. Family: Above all, Armree loved to be around her family. Almost every Sunday after church, she and her sisters would gather around the table to cook and converse about any and everything. Armree loved talking on the phone, caring for her house plants and gardening. Some of her greatest joys in life included attending the Heard Family Reunions and being a dog mom to her forever poodles Monique and Finley Tate. She was loyal and dedicated to her children and grandchildren and always did her best to inspire and support them. Armree lived an extraordinary life. She leaves her three daughters Debra Brown, Dwayne Turner (deceased), Ralph Turner Jr. (deceased), Vanessa (Reginal) Fagan, Carlisa (Andrew) Richards, honorary daughter Reagenna Akins, brother Charlie Brown, grandchildren Andre’ Sheckles (deceased), Twyla (Michael) Johnson, Desmond Turner, Lotorio Dew, Senetria Freeman, Candace Brown, Kenneth Smith, Brandon Torrence, Trent Hawthorne-Richards, Cortney Richards, Ashley Richards, Alexander Richards, a host of great-grandchildren, nieces, nephews, cousins, extended family and friends to honor her legacy. Armree Turner, 89 passed on January 26, 2022. Services and visitation will be on Friday, February 4, 2022 at Quincy J Webster Funeral Chapel, 2805 N. Franklin Road. Visitation will be from 9-11 with services to follow. Interment will be at New Crown Cemetery. Please keep the family in your prayers.

Armree Turner was born January 30, 1932 in West Point, Mississippi. She was the lovely daughter of Addie Brown and Willie Brown (deceased) and she was one of eleven children. As a young girl, she moved from her home state Mississippi to Indianapolis,... View Obituary & Service Information

The family of Armree Turner created this Life Tributes page to make it easy to share your memories.

Send flowers to the Turner family.