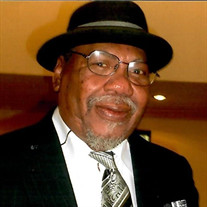 Our Father “The Champ” MR. CARL MANUEL IVY was born June 11, 1947 in Oxford, Mississippi to Robert and Ina Eggerson Ivy. Carl moved to Indianapolis, IN at the age of 12 years old. CARL received his education in the Indianapolis Public Schools System. CARL was wonderful, loving husband and father. He was a kind, genuine man who valued the friendship he held with so many. His warm smile, wit, sense of humor laughs and stories will be remember and truly missed. Above all, family was most important to him. CARL married Juanita Ivey on November 4, 1975. The two shared 55 years together raising three children. CARL “BUDDY” loved sitting in his back your listening to his music and having a cocktail (MillerLite). BUDDY was famous for his Bar-B-Que and he loved to cook. BUDDY loved to travel and going to the casino. CARL work at Mid-America and Extrusion as a supervisor. He retire with 38 years of service. CARL departed his earthly home for his heavenly home on August 17, 2021 at the age of 74 years. CARL was preceded in death by his parents Robert Ivy and Ina Ivy. (Son) Darius Ivy, (sister) Mary V. Carruthers, (brothers) Charles and Leonard Ivy, Ernest Luster and L. Cannon Luster. CARL leaves to cherish his memories his loving wife Juanita Ivy, two sons Robert (Pam) Ivy, Lonnie Ivy and one adorable daughter LaQueta Ivy (Shoo-Shoo). Grandchildren, Jamiyah, Jaiceon, Robert Jr., Jarron Abdullah, Lonnie Jr., Terrance, Rodney and Alonzo Ivy. Two great grandchildren Roman and Alanie Ivy. One nephew who insist he is a son not, nephew Demarkus Carruther. One adopted neighbor son Kevin, whom he called Kalvin and a host a nieces and nephews, grand and great grand. Three sisters Robessie (William) Conner from Texas Lee Ann

Our Father &#8220;The Champ&#8221; MR. CARL MANUEL IVY was born June 11, 1947 in Oxford, Mississippi to Robert and Ina Eggerson Ivy. Carl moved to Indianapolis, IN at the age of 12 years old. CARL received his education in the Indianapolis... View Obituary & Service Information

The family of Carl M Ivy created this Life Tributes page to make it easy to share your memories.

Our Father “The Champ”

Send flowers to the Ivy family.