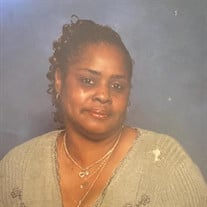 Corsetta “Maria” Ratcliff, was born April 6, 1948 in Indianapolis, Indiana. She was the daughter of James Travis Fowler Sr. and Perle Lorraine Peoples-Fowler. Maria, confessed her love for Christ at an early age and was baptized at Second Christian Church under the leadership of Rev. Robert Hayes Peoples. Maria, attended Indianapolis Public Schools for her general studies. She later became a student of Martin University where she pursued a BA in Psychology. She worked and retired from Paper Manufacturers in Indianapolis. Maria, was a loving mother, sister, aunt, cousin, grandmoth- er and friend. She loved her independence and enjoyed watching Chicago PD while curled up on her couch. Maria was a proud mother. She always bragged on “her” son for she felt he could do anything. Losing her only daughter weighed heavy on her heart. She would often times mistakenly call her granddaughter Jazmin by her daughter’s name. Most days of grief was distracted by the love of her family and friends. She had a story to tell about everything and an effortless way of making everyone laugh. She had a smile that brightens a room. She was very loved by everyone that knew her and will be extremely missed. Maria, departed this life on March 3, 2022. She was preced- ed in death by her father, James T Fowler, Sr., mother, Perle Fowler, daughter, Marcia Ratcliff, sister, Constance Tinnin-Anderson, brothers, Lonnie Fowler (Patty), Alvin Fowler (Cassandra), and Warren Fowler. Maria, leaves to cherish precious memories of her life in the hearts of her son, Gregg A. Ratcliff Sr. (Angela) brothers James Fowler Jr., and John Fowler (Trudy), and sister, Perle Beamon (D’Wayne), host of nieces, nephews, cousins, grandchildren, great grandchildren and friends. Corsetta M.Ratcliff , 73, passed on March 3, 2022. Services and visitation will be on Tuesday, March 15, 2022 at Quincy J. Webster Funeral Chapel. Visitation will be from 10-11am with services at 11am. Interment will be at New Crown Cemetery. Please keep the family in your prayers.

Corsetta &#8220;Maria&#8221; Ratcliff, was born April 6, 1948 in Indianapolis, Indiana. She was the daughter of James Travis Fowler Sr. and Perle Lorraine Peoples-Fowler. Maria, confessed her love for Christ at an early age and was baptized... View Obituary & Service Information

The family of Corsetta M Ratcliff created this Life Tributes page to make it easy to share your memories.

Send flowers to the Ratcliff family.