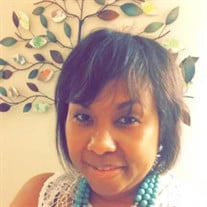 Cynthia Gray Murphy was born April 29, 1960 in Memphis, Tennessee to the proud parents of Pastor Richard L. and Jessie Mae Gray Sr. Cynthia was born in Memphis, TN but spent the earlier years of her childhood in Chicago, IL and then relocated to Gary, IN with her family. At a very early age, Cynthia boldly committed her life to Christ. Education was key to Cynthia. In 1978 she graduated from Roosevelt High School with her heart set on entering the medical field. Cynthia then continued her education on at the Michael Ries Medical School. She then started her career off as a dental hygienist and dedicated the next several years to the dentistry field. As she continued to make strides in her career, she began her next role in life as mother. In 1982 Cynthia gave birth to her first-born son Bryan L. Odom-Murphy. Becoming a mother only motivated her to work even harder so that she would be able to provide a secure life for her son. In the mid 1980’s, Cynthia reconnected with her high school sweetheart and then relocated to the city of Indianapolis, IN. In November of 1985, Cynthia then married her former husband Bernard A. Murphy. By 1987, she gave birth to her second child Jessica Nicole Murphy. Now as a mother of two, Cynthia was determined to be the best provider she could be for her family. She enrolled in a nursing program at Ivy Tech Community College where she received her Associates degree in nursing. After passing her nursing boards, her nearly 30-year long career as a Licensed Practical Nurse began. Cynthia’s life was dedicated to service and caring for others. If there were ever a medical question, Cynthia was the one you asked. She was known for keeping her “pill” book close to look up a medication name in a moment’s notice. She was unofficially the family liaison when it was time for a conversation with doctors or other medical professionals. Cynthia’s nursing career had come to a halt when she was diagnosed with breast cancer at the very young age of 29. That same determination that got her through nursing school, got her through the fight of her life. She fought relentlessly to beat cancer’s butt and Cynthia remained in cancer remission for the next 32 years. Besides being known for her vigorous ability to fight and her heart for nursing, if you knew Cynthia then you knew her love for the color orange was real, she loved her home shopping networks, she had the sweetest singing voice, and her cream cheese pound cakes were always a crowd favorite. Her laugh was so infectious, and her heart was so big. Cynthia went on to glory on September 10, 2021. She was greeted in heaven by her oldest brother Richard L. Gray Jr. She leaves behind her children Bryan (Myriam) and Jessica. They will honor her along with her four granddaughters Alaysa, Amayah, Jaila, and Makenzie. Cynthia is blessed to have her parents Pastor Richard L. Gray Sr. and Jessie Mae Gray along with all her remaining siblings to keep the memory of her alive. She is also honored by a host of nieces, nephews, and other close friends and family. Cynthia’s life was a gift to anyone who had the pleasure of merely meeting her. She was a gift to this world. While the absence of her body leaves many of us sad but Cynthia’s spirit will live on through all of us forever and ever.

Cynthia Gray Murphy was born April 29, 1960 in Memphis, Tennessee to the proud parents of Pastor Richard L. and Jessie Mae Gray Sr. Cynthia was born in Memphis, TN but spent the earlier years of her childhood in Chicago, IL and then relocated... View Obituary & Service Information

The family of Cynthia Murphy created this Life Tributes page to make it easy to share your memories.

Send flowers to the Murphy family.