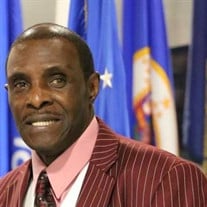 Mr. David Edwin “Hip” Watkins, was the son of the late Elmore and Mary Watkins, born on August 2, 1954 in Indianapolis, Indiana. David was respectfully known for many years as “Hip” or “Eddie” to his family and friends. David graduated from Arsenal Technical High School in Indianapolis and in 1977 joined the United States Navy. Here he received a trade in Welding and spent several months at a time “out to sea” away from his family. His most notable tour was during the Persian Gulf War from 1990-1991. This war started August 2, 1990, on his birthday, and he would spend several months of his life thereafter in combat. He honorably retired on 1 March 1997, giving 20 selfless years of service to the United States Navy. David was very independent and always wanted to do things his way. He had a seriousness about himself but was also extremely genuine and sincere to anyone he met. He had an impeccable fashion sense and commanded any room that he entered. He was witty and had a great sense of humor. One of his greatest joys was the love for his children. He was a “tough love” type of father who made his children strive to be the best. He instilled them with the tools needed to survive anything in this world. After his military service, David later professed his belief in Christ and went into ministry. He became a Licensed Minister on February 9, 2014. David loved to travel and lived in many states but decided to make his final home in Wichita Falls, “Big Sky”, Texas in 2011. David was preceded in death by his parents Elmore and Mary Watkins, his eldest sister Vivian Ray; his brothers Mike Watkins, Dallas Watkins, and Robert “Rock” Watkins and Wife Janie Lee Watkins. David “Hip” Watkins moved on to his new home on August 12, 2020 at the age of 66 years old. He leaves to cherish his memory his six children; David E. Watkins Jr, Tarlester “Lamont” Green, Antwon “Reggie” Green, Michelle “Sherry/Girls” Watkins, Damian M. Watkins and Dominique M. Watkins; his grandchildren, Tarmont Green, Davion Maurice Smiley, Aryonna Michelle Kirk, Xavier MiKai Booker, Meadow Zoe Green, Damian Maurice Watkins Jr, Major Antwon Green, his sister Daisy Quick; his Special Friend Dorothy Owens and a host of nieces and nephews. Graveside service are Thursday August 27,2020 at 10am in Marion National Cemetery

The family of David Watkins Sr created this Life Tributes page to make it easy to share your memories.

Mr. David Edwin “Hip” Watkins, was the son of the late Elmore...

Send flowers to the Watkins family.