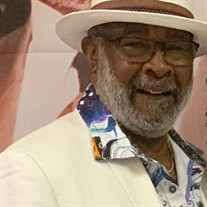 Mr. Dennis Hassan Ahmad was born May 1, 1946 in Cadiz, KY to Tandy and Mildred Alexander who preceded him in death. He committed his life to Islam in late 1973 or early 1974. That changed his life. Dennis attended a school in Cadiz, KY until he could no longer stand the unjust ways in the small community. In the late 1960s, Dennis relocated to Indianapolis, IN where he raised his family. Dennis is a community advocate and one of the original founders of "The Watoto Wa Simbas." This was a group of young black men that organized a fair shake for the southside of Indianapolis. Once his sons were old enough to participate in sports (football), he was not a sideline parent, HE WAS THE COACH! Soon after, he was voted the President of the Garfield Football League. Dennis was unapologetic with thoughts of value. If he said it, he meant it! Dennis was employed at Ford Motor Company. Dennis loved to talk, play cards, and watch sports. His favorite basketball player was Kobe Bryant. Dennis loved his family. He believed that a family that worked together, stays together. Dennis was a strong man with strong opinions. Dennis was a devoted husband, father, grand-father, and great-grandfather. Dennis departed this earthy life at the age of 75 years, 10 months and 5 days. He leaves to cherish Jaletha Ahmad (wife), Lamont Ahmad (son), Toi (Corey) Ahmad-McGregor, (daughter), Malik (Ericka) Ahmad (son), Dennis Hassan Ahmad (son), Shadonna Ahmad (daughter) Eric McCauley (stepson). Grandaughters Sasha Bluitt and Nya Ahmad. Greatchildren Kaiyan, Jaxen and Jadon Boyd. Brothers: George, Willie and Charles. Sisters: Imalmojene, Mildred, Rheda, Doris and Joyce. Preceding in death: John Jr., Arcjoe. Emma and Martha. A host of nephews and nieces and other relatives Dennis Hassan Ahmad, 75, passed on March 6, 2022. Services will be on Wednesday, March 9, 2022 from 10-11am at Masjid Al-Fajr, 2846 Cold Spring Road. Interment will be in New Crown Cemetery. Please keep the family in your prayers.

Mr. Dennis Hassan Ahmad was born May 1, 1946 in Cadiz, KY to Tandy and Mildred Alexander who preceded him in death. He committed his life to Islam in late 1973 or early 1974. That changed his life. Dennis attended a school in Cadiz, KY until... View Obituary & Service Information

The family of Dennis Hassan Ahmad created this Life Tributes page to make it easy to share your memories.

Send flowers to the Ahmad family.