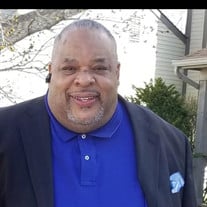 Ernest Ronald Wilkins, age 66, transitioned from labor to reward on Friday, January 8, 2021. He passed one day before his wife of 33 Years Ann Grissom-Wilkins. Ronald, aka Ron and “Ron Bull” was born September 6, 1954, to Ernest Coy and Jewell Lemon Wilkins in Indianapolis, Indiana. He attended Indianapolis Public School Elementary School #43, graduated from Shortridge High School in 1972, and also attended Ball State University. During his youth, Ronald was a dutiful Cub Scout and his mom Jewell, was a daunting Den Mother of Pack 102. He played wind instruments in high school (some well enough to almost be in a professional band) and also excelled in football...whereas he got his name “Bull”. At a young age, Ronald united with Mt. Zion Baptist Church under the pastorate of Rev. R.T. Andrews, Sr. Ronald retired after working 12 years for Allstate Insurance in 2016. He’d also held jobs at IPS and RCA. He loved music, playing cards, and sports. He watched the games and called friends and family throughout the games to comment and to vent! Ronald was a true “Wilkins Man”! He loved being around family and always made it known he was a “Wilkins” and proud of it!! He was always his Aunt Sis’ pet and was spoiled by her until she passed. Ronald lived a full life and enjoyed every minute of it! He was very analytical but also fun to be around!! He will be missed by all who knew and loved him. Ronald leaves to cherish his memory and celebrate his life, his 3 children: sons, Ernest Ronald Wilkins, ll, “Ronnie” (LaTiffany), Michael Wilkins “Mike, and daughter Denise Dixon- Wilkins; 4 grandchildren: Ernest Ronald Wilkins, III “Tre”, Taylor Wilkins, Xaiden Wilkins, and Xander Wilkins, father and mother-in-law, Joseph & Betty Grissom, sister in law Ruth Grissom-Morton (Frank), nephew Joseph Grissom and a host of uncles, aunts, cousins many friends, and extended family members. May God Bless Each Of You.

The family of Ernest R Wilkins created this Life Tributes page to make it easy to share your memories.

Send flowers to the Wilkins family.