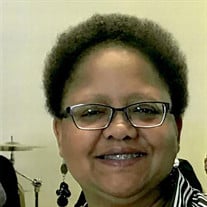 Evelyn Denise Battle was born on November 9, 1973 in Indianapolis, Indiana to Samuel Gentry and Stephanie Battle. “Lynn”, as she was often called, received her elementary education from Indianapolis Public Schools and graduated from Arlington High School in 1992. She enlisted in the U.S. Army Reserve in 1992 and served for 7 years. She graduated from Ivy Tech State College with an Associate in Nursing in 2000. She enjoyed being a nurse and was employed at several facilities including American Senior Communities and Southpointe Healthcare Center. In 1986, Paul and Carolyn Burns adopted Evelyn into their loving family where she was introduced to Christ and was baptized at Travelers Rest Missionary Baptist Church. Later, she joined Emmanuel Missionary Baptist Church and was currently a member of Abundant Faith Christian Church. Evelyn was an avid reader and enjoyed cooking. She loved serving God and was eager to introduce Christ and his wonderful gift of salvation to everyone she encountered. In 1997, she united in holy matrimony with Jonathan Miles and was married to him for 7 years. Evelyn did not birth children, but she loved and cared for her furry friend, Touche’ Renee. She was a sponsor of the American Cancer Society. She was preceded in death by her birth parents, Samuel Gentry & Stephanie Battle, her father, Paul Burns: brothers, Derrick Alexander, Robbie Burns, Andray Burns, & Neiman Burns: godbrothers, Joseph Hopkins and Jae Harrison. She leaves to carry on her legacy, her mother, Carolyn Burns:brothers, Michael Alexander, Leroy Hall, Timothy Battle, Brian Burns, Tiant Genry, David Burns, Daniel Burns, Naaman Burns,Steven Burns, & Ervin Burns: sisters, Melissa Appleton and Deonna Burns: proud odparents, Elder Charles & Tessa Wells: sisterfriends, RiNita Beckett, Nikia (Vaughn) Godet, & Natalie (Richard) Hinkle, a host of nieces, nephews, cousins, loved ones and friends.

Evelyn Denise Battle was born on November 9, 1973 in Indianapolis, Indiana to Samuel Gentry and Stephanie Battle. &#8220;Lynn&#8221;, as she was often called, received her elementary education from Indianapolis Public Schools and graduated from... View Obituary & Service Information

The family of Evelyn D Miles created this Life Tributes page to make it easy to share your memories.

Evelyn Denise Battle was born on November 9, 1973 in Indianapolis,...

Send flowers to the Miles family.