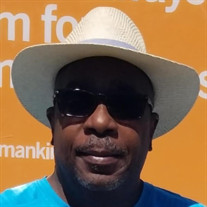 Kenneth Ray Sykes, son of Eddie M. Sykes and Lizzie M. Sykes was born on August 20th, 1962 in Indianapolis, Indiana in the year of our Lord Jesus Christ. Kenneth graduated from Arlington High School in June 1981. Kenny accepted Jesus Christ as his personal Lord and Savior at an early age and later recommitted his life to Christ at Ferverent Prayer Church in Janary 2011. Kenny started his career as a sous chef at several restaurants in Indianapolis, Indiana, including the Oyster Bar and Rick’s Cafe. Kenny’s last place of employment was at Von Duprin where he worked on line at the factory. Kenny retired from Von Duprin due to health challenges. Kenny met the love of his life, Cheryl, while she was walking her dog, Nala, during the fall of 2010. Kenny and Cheryl were united in holy matrimony on August 25th, 2012 at Fervent Prayer Church by Pastor James W. Jackson. Cheryl and Kenny’s union was further blessed by the blending of Cheryl’s three adult children, Jerelyn, Jared, and Harvin Jr (AJ). Kenny was committed to his family and friends and was willing to serve wherever and whenever he was needed. Kenny enjoyed music, football, classic cars,traveling and showing off his culinary and grilling skills. Kenny loved dogs and considered Mercy, the family dog, "his dog". Kenny transitioned from this life on Friday, March 18th, 2022, in the year of our Lord Jesus Christ. Kenny was preceded in death by his parents, Eddie M. Sykes Sr. and Lizzie M. Sykes. As well as his siblings, Yvonne "Cookie" Brown, James Sykes, Marilyn Sykes, Lee Sykes, Margaret Woods, and Miriam Sykes. Kenny is survived by his wife, the love of his life, and friend, Cheryl Sykes, his bonus children, Jerelyn Wilson, Jared Loyd, and Harvin Loyd Jr. (AJ); his siblings, Eddie Sykes Jr., Madelon Sykes-Dawson, Melinda Buford, Bryant Sykes, and Betty George (Kenny); as well as a host of nieces, nephews, aunts, uncles, cousins, grandchildren, and friends! Kenneth Ray Sykes 59, passed on March 18, 2022. Services and visitation will be on Saturday, april 2, 2022 at Fervent Prayer Church, 10512 East 38th Street. Visitation wil be from 10-12pm with services to follow at 12pm. Entombment will be in Washington Park East Cemetery.

The family of Kenneth Ray Sykes created this Life Tributes page to make it easy to share your memories.

Send flowers to the Sykes family.