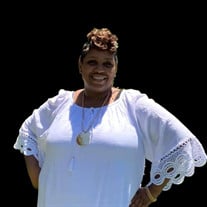 LaQueda Elise Webster, 42, passed on December 19, 2021. LaQueda Elise Webster was born on November 29th, 1979, to Pamela Drain and Terry Webster, Sr. She was born and raised in Indianapolis, In. She grew up in the IPS school system graduating from Arlington High School. She then received her Associates and Bachelor’s degree from Harrison College. At the time of her passing she was also in pursuit of her Master’s degree. LaQueda was raised in church at an early age and received Christ as her personal Savior. She was baptized at both Living Word Church and Nu Corinthian Church. She also attended Emmanuel Baptist Church, Living Water Fellowship Church, and The Village Church where she served in the music ministry and hospitality ministry. She loved to work with the youth in the church and led the Liturgical Youth Dance Group ”Beautiful Feet”, at Living Word Baptist Church. She loved to sing in the choir at whatever church she attended, you would find her singing in the choir with High Praise!! She was employed as a substitute teacher in Lawrence Township, and later became a bus driver for Washington Township. She was united in holy matrimony to Brian Finch on May 8th, 2010. Together they had a blended family of seven children and four grandchildren. She was preceded in death by her grandparents George Wendell and Willa Drain, and Jimmy Webster. She leaves to cherish her memories, her husband Brian Finch, her children, KeAsia Bush, Kaila Davis and Kaleb Webster, Sr., Jasmin Finch, Brien Finch, William Finch and John Kelly; grandsons, Kayden Bush and Kaleb Webster, Jr. Grandmother: Helen Webster, parents: Pamela Drain, Beverly Webster, and Terry Webster, Sr. Siblings: Morgan Webster and Terry Webster, Jr. (Kela Webster); niece, Tanner Webster; nephew, Trey Webster, and a host of uncles, aunts, and cousins. Services and visitation will be held on Thursday, December 30, 2021 at Nu Corinthian Baptist Church, 5935 West 56th Street. Visitation will be from 10-12pm with services following at 12pm. Interment will be at Crown Hill Cemetery. Please keep the family in your prayers.

The family of LaQueda Elise Webster created this Life Tributes page to make it easy to share your memories.

Send flowers to the Webster family.