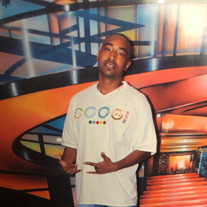 Larry Deon Cosby “RB” was born on June 18, 1972 at 2:22pm in Indianapolis, Indiana. He is Sarah Lowe’s first born. He was also raised by his “Pops”, Willie Lowe who married his mother in July of 1986. His grandfather, John Boyd, preceded him in death in January of this year. Dee was educated by Indianapolis Public, Washington, and Pike Township school systems. He earned his GED in 1991. Dee accepted Christ at a very young age. He was born and raised in First Samuel Missionary Baptist Church where he was the church’s baby. He later joined Mount Olive Missionary Baptist Church. His mama had him in church from sunup to sundown on Sunday mornings and he’d often reminisce about his Sunday adventures such as Sunday School, morning service, afternoon service, BTU, evening service and trip to Long’s Bakery. Dee taught and continued to talk to his children about the Lord. Dee loved the Lord and was not ashamed to talk about him to anyone. Dee had previously worked at both Herff Jones and Carrier. Larry was a loving son, father, papa, significant other, brother, grandson, uncle, nephew, cousin and friend. He was very family oriented and ALWAYS the protector. Dee was a leader, and his friends within the Hard Part community looked up to him. Dee loved to cook, spend time with his family (especially Papa Stinkabutt), listen to music, watch sports and play with people’s ears! If you ever needed a good laugh or someone to talk to, Dee was the person to call (no matter the time). To know him was to love him. Dee’s number one job was being a father and taking care of his family. His family affectionately dubbed him “My Larry” in which he was everyone’s Larry until death and beyond. He loved his mother like none other and would often call her in the middle of the night just to hear her voice. He was definitely a mama’s boy, although he’d say “No I’m not, SHUT UP and quit being worsesome” when one of his siblings would make fun of him (Lil Sarah). Larry Deon Cosby departed this life on Sunday, May 3, 2020 at 47 years, 10 months and 15 days. He leaves to cherish his memory two daughters, Chaya Morris, Kheela Cosby; and one son, Leroy Smith; three grandchildren, Tarynn, Peyton and Braidyn. His significant other, Rennie Wilson, who was the love of his life, mother of two of his children, “Bonnie to his Clyde” and best friend whom was there with him until the end of his life. His parents that he “loved to death” Sarah “Mama” and Willie “Pops” Lowe. One brother, Reggie Lowe (Debbie), three sisters, Lisa Brown, Shyla Crenshaw and Lil Sarah Lowe. He also leaves behind his nieces and nephews, his grandmother- Sarah Boyd, and a host of aunties, uncles, cousins and loved ones. Dee is terribly missed and will always be missed.

The family of Larry Deon Cosby created this Life Tributes page to make it easy to share your memories.

Customized sympathy cards. Mailed for you.