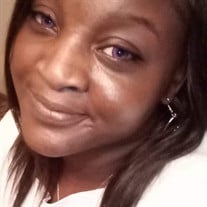 Latia Elaine Scott, affectionately known as “Tia” the daughter of Sophia R. Evans and Stepfather, Eddie L. Evans was born on December 30, 1992 in Indianapolis, IN. Latia was the youngest of her four siblings and later became a mother of four beautiful children herself where she did all she could to give them the love, structure and provision she could provide as a single parent. Latia accepted Christ as her personal Savior at an early age which gave her the victory to overcome many challenges that she encountered in her short time on this earth. Latia was blessed with several gifts and talents that she displayed among family and friends and had a smile that would illuminate a room and instantly show how beautiful she was inside and out. Latia received her primary education at Pike and Warren Township schools and later would attend HYCA at Camp Atterbury and Job Corp of Indiana to gain other educational skills. Tia loved expressing herself in every way from hair, make-up and jewelry head to toe. Latia Elaine Scott, departed her earthly life on Friday, January 7, 2022 at the age of 29 where she leaves to cherish her precious and beautiful children: Christian T. Scott, Mosiah T. Scott, Trinity R. Scott, and Legend L. Scott. Her Mother Sophia R. Evans (Step Father) Eddie L Evans, Brothers, Franklin L Scott Jr (Saren Scott) , Eddie (Heather) and Anthony Champion; Brother Brandon L. Jackson ; Sisters, Brittany N. Echols (Terrell Echols) and Courtney Champion, and Grandmother Pastor Kathleen M. Young and Grandmother Geneva Evans and a host of aunts, uncles, nieces and nephews, cousins, extended family members and MANY friends. Latia E Scott, 29, passed on January 7, 2022. Services will be on Wednesday, January 19, 2022 at Friendship Missionary Baptist Church. Visitation willl be from 10-12pm with services to follow at 12pm. Please keep the family in your prayers.

Latia Elaine Scott, affectionately known as &#8220;Tia&#8221; the daughter of Sophia R. Evans and Stepfather, Eddie L. Evans was born on December 30, 1992 in Indianapolis, IN. Latia was the youngest of her four siblings and later became a mother... View Obituary & Service Information

The family of Latia E Scott created this Life Tributes page to make it easy to share your memories.

Send flowers to the Scott family.