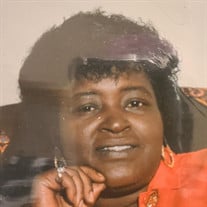 Mable L. Rodgers was born March 12, 1946 to Colie and Margie Jenkins, in Oxford, Mississippi. She was affectionately called “Daydee”, by her siblings, and family, a nickname given to her by her grandfather, the late (Andy Chatman), “Papa”. Mable’s family relocated to Evansville, IN. where she attended Chestnut Walnut School. She later moved to Indianapolis, IN. where she attended School #26, as a youngster and later Shortridge High School. Mable was employed at Jack Salowski, Sterling Laundry, Motel 6 and Budget Inn, in housekeeping. She never met a stranger. Mable loved to talk and asked questions. Mable was united in Matrimony to Lloyd Charles Rodgers, on September 14, 1973. She called him Roger. She loved Roger. They were together for 56 years. Mable loved music, the “Blues”, and “Quartet”. She loved to dress, dance, and cut her step spinning and kicking high, showing-off her unique moves! She announced herself as a “Super Star”!!! She had a hardy laugh that was so contagious. Mable enjoyed joking around with her family, watching her cowboys and Indians western movies, sports, and going to the casinos. She would talk for hours upon hours on the phone with her sisters Anna, Mary, granddaughter Tasha, grandson Gary, god-daughter, Dottie Ann Williams, and her friends, while drinking her morning coffee, and listening to her gospel quartet music. Mable would occasionally attend the Upper Room Church, in Indianapolis, IN. She would call upon her sisters and family to sing with her, forming her own quartet group. It was a delight to witness. Mable L. Rodgers departed this earthly life on November, 4, 2021. She was preceded in death by her only child Gary Jenkins, her parents Colie and Margie Jenkins, a sister Diane Jenkins, two brothers Leroy Hollis, and William C. Jenkins (W.C.). She leaves to cherish her memory and legacy, her spouse of 48 years, Lloyd Charles Rodgers; stepchildren Cora, Shirley (Rodney), Carolyn (David), Arlesta (Allan), Patricia (Anthony), and Lloyd, Jr.; Sisters Nina (Richard) Whitsey, Anna Jenkins, Mary Jenkins; brother Chat “C.J.” (Sharon) Jenkins; aunt’s Dorothy Joiner, and Lucille (Roy) Luster. and a host of grandchildren, nieces, nephews and friends.

Mable L. Rodgers was born March 12, 1946 to Colie and Margie Jenkins, in Oxford, Mississippi. She was affectionately called &#8220;Daydee&#8221;, by her siblings, and family, a nickname given to her by her grandfather, the late (Andy Chatman),... View Obituary & Service Information

The family of Mable L Rodgers created this Life Tributes page to make it easy to share your memories.

Send flowers to the Rodgers family.