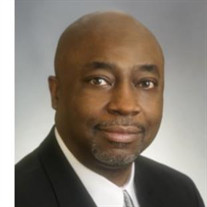 Michael E Jennings, 65, passed away October 21, 2019 after a brief illness. He was surrounded by family and friends who loved him dearly. Michael was born in Illinois to Clarence and Juanita (Tarlton) Jennings. After moving to Gary, he played football and learned to play drums at an early age. While in high school, he was a drummer with Jazz and R&B bands, playing at events and venues all around northwest Indiana. After graduating from Ball State University in 1975 and working as a probation officer for 2 years, he was accepted at Indiana University School of Law, where he met his future wife, Gloria, graduating in 1980. Michael moved to Indianapolis and embarked on careers at Legal Services of Indiana, Inroads Inc, Indianapolis Power & Light and AES that would span 37 years, retiring in March 2018. During his career Michael was a dynamic leader and tireless advocate for diversity. He served on the Board of Directors of Mid-States MSDC and Westview Hospital, serving as Chairman of the Board at various times for both organizations. In early 2019, he returned to the workforce as Procurement Manager for Indianapolis Airport Authority, excited for this new chapter of his life. Michael and Gloria were always on an adventure- traveling the world, hanging out with family and friends or the musician in him teaching grandson Drew to play the drums at two-years-old! Mike was a wonderful husband, father, brother, grandfather, friend, colleague, coach and comforter. Known for his intelligence, unique sense of humor and passion for music, he was also a balance of calm and optimism. For Mike, everyday was a “great” day and he taught us all to live life with no regrets. He leaves to cherish his memory beloved wife of 39 years, Gloria; son, Christopher (Gretchen); daughter, Alexis; grandson, Drew; granddaughter (due in December), Dylan; brother, David Jennings; sisters, Sharon Jennings, Debra Whisenton; In-laws, Charles (Cassandra), Jan, Leslie, Marilyn Christopher; brother-in-law, James Springfield (Hortense); nephew, Jerry(Nikki) Springfield; niece, Alisa Springfield; great nieces/nephews; extended families, Little’s, Blackwell’s, Hale’s, Clowers-Davis’, Flanagan’s and many lifelong friends. Michael was preceded in death by his parents and two sisters, Lorraine Springfield and Hermetta Jennings. True to who he was, Mike wants to Celebrate his Life with a Jennings’ Party held on Thanksgiving Day, Thursday November 28, 4-8 pm at Mid-States MSDC, 2126 N. Meridian St. In lieu of flowers, contributions in Michael’s memory may be made to Mid-States MSDC. Final arrangements and cremation have been entrusted to Quincy J Webster Funeral Chapel, Indianapolis

The family of Michael Jennings created this Life Tributes page to make it easy to share your memories.

Send flowers to the Jennings family.