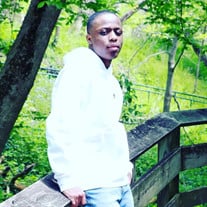 Noah Eugene Morton, was the second child of two born to the parents of Roy A. Morton (St. Thomas Virgin Island) and Anika M. Harris (Indianapolis, IN), on September 22nd 2002 in Indianapolis, IN. He started his early education at Capital City SDA School. From there he attended Westlane Middle School. Noah successfully graduated from North Central High School Class of 2021. Noah had plans on joining the Air Force in Spring 2022. In the interim, Noah worked with his older brother, Trey, at Sutton-Garden Co. Noah was baptized into the Emmanuel Seventh-Day Adventist Church, where he was a member of the Pathfinder's club. Noah was a talented musician. He beautifully played the trumpet and was a percussionist in the EDC drumline. One of Noah's hidden talents was designing logos for gamers on YouTube. Further, Noah had an extremely analytical, inquisitive, and investigative mind that often led him to pose questions and analyze the world around him. His family believed that he would have made a great lawyer and leader. Noah was affectionately known as Fatty by those closest to him and later in life referred to as #DaBoi. In addition to his analytical thinking, he had his own "language" and unique views on the world that can only be described as Noahisms. Noah was an avid gamer, if Noah wasn't working or sleeping, you could find him gaming! His expressions, mannerisms, and the idiosyncrasies of his storytelling will be remembered by all who knew him. Finally, Noah was known to have a kind, gracious and loving heart. In his final act of love and kindness, his heart, liver, kidneys and pancreas were donated to save four lives. #DaBoi lives on and will forever be remembered as a hero. Noah battled with asthma for most of his life. On Monday, November 1st, Noah suffered an asthma attack and was hospitalized. During his last days, he was surrounded by family and friends. He will be solely missed. Noah Eugene Morton departed this earthly life on Thursday, November 4th at the precious age of 19, 1 month, 1 week and 1 day. Preceding him death is his grandmother Dorris Harris. He is survived by his mother Anika Harris, father Roy Morton (Brittnaye), 4 brothers Roy Ill and Hezekiah Morton, Jeremiah and Asher Blair, 2 sisters Tyjeona Morton and Sinai Morton, Grandfathers Thomas Harris, Roy A. Morton and Grandmother Josephine Thomas, aunts, Evelyn Miller and Nilda Morton and uncles, Nashamba Floyd, Jermaine Floyd, Rasheed Morton, Raheem Morton, favorite cousin Akira Floyd, along with other beloved cousins, extended family and friends.

Noah Eugene Morton, was the second child of two born to the parents of Roy A. Morton (St. Thomas Virgin Island) and Anika M. Harris (Indianapolis, IN), on September 22nd 2002 in Indianapolis, IN. He started his early education at Capital City... View Obituary & Service Information

The family of Noah Eugene Morton created this Life Tributes page to make it easy to share your memories.

Noah Eugene Morton, was the second child of two born to the parents...

Send flowers to the Morton family.