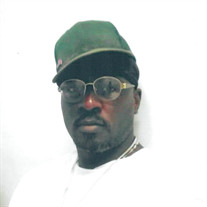 Mr. Ronald D. Williams-Bey was born June 22, 1976 the son of the late William Curtis Jenkins and Belinda Williams in Indianapolis, Indiana. He was Belinda’s one and only son, her heartbeat. Ron spent his life in Indianapolis, Indiana. He attended Indianapolis Public School #67 and Arsenal Technical High School. He obtained his GED and a host of certificates and where he spent his formative years into adulthood. Ron always had a smile on his face no matter what. That smile was contagious. He had a heart of gold and was a thoughtful and caring person that would help anyone. He always had an encouraging word for others. As a child, he loved spending time with his cousins Damond, Mike and his uncle Junior. They were more like brothers growing up. They would hang out at the Ponderosa projects and throw rocks at cars then run and hide. Typical boy stuff. They also played sports and games at Rhodius Park and received awards for their participation. Ron was a member of the Cub Scouts and Boy Scouts. He played basketball for Hawthorne Community Center and football at Thatcher Community Center playing on the Eagles football team. Ron accepted Christ at an early age and converted to Islam (Moorish American Faith) as an adult. He leaves to cherish his memory, mother Belinda Williams, step-father Anthony Earl Shovan, one son RonZay (Williams) Buckner, three bonus children Jayden Martin, Isaiah Taylor, and Reniyah Gilliam, one brother Curtis Jenkins, three uncles Chad Jenkins, Harvey Williams Jr (Helina), and LaVorus Williams, great uncle Thomas Williams (Thelma), aunts Pamela Clark (Lorenzo), Tammy Johnson (Charles); great aunt Jenetta Johnson, great great aunts Sarah Appleton and Laura Russell, God mother Terry Hopkins; a host of cousins, other relatives and cherish friends. Ronald D. Williams, 45, passed on February 27, 2022. Services and visitation will be on Saturday, March 12, 2022 at Quincy J Webster Funeral Chapel. Visitation from 10-11 with services to follow at 11am. Please keep the family in your prayers.

The family of Ronald D Williams created this Life Tributes page to make it easy to share your memories.

Send flowers to the Williams family.