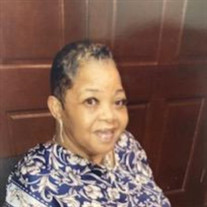 “House of Beauty This is Cutie” Ronna Jean Irvin was born to Anna-Bell Williams and John Wesley Radford on July 24, 1952 in Indianapolis, Indiana. Jeannie attended school #64 in elementary, she was a graduate of Emmerich Manual High school in 1970. Jeannie received her degree in Business Administration from Ivy Tech in 1980. Jeannie professed her life to Christ at a young age under the leadership of Rev. Charles Poole at Garfield Baptist Church. “Jeannie” was who she was lovingly named Maw Maw, Aunt Jean Jean, and Cutie by her family and friends. Jeannie was first employed by Eisner’s Grocery and St. Francis Hospital. Jeannie later worked with Westview Hospital for over thirty years prior to retiring in 2014. Jeannie was named “Maw Maw” by her grandchildren which carried on to the great grands who she loved spending quality time with. Jeannie truly enjoyed traveling in her younger years and grew to enjoy relaxation in her recliner in her later years. Ms. Cutie looked forward to her weekly nail and lash appointments making sure she was the true definition of Glam-ma. Jeannie loved bowling and doing water aerobics with her sisters and friends. Jeannie’s overall pass time was watching First 48 and attending Church functions with her grands and great grands. Jeannie was the birth mother to Michael (Erica) Ellington Jr, and Yolanda (Jerry) Brown. However, she was a mother of God to so many, she taught many to be strong and confident in who God made them to be. Ronna Jean Irvin earned her wings on January 2nd, 2022 at the age of sixty nine years and six months. Jeannie will truly be missed by so many. Special thanks to Michael Ellington Sr. for the endless unconditional Love and support that he has provided over the years. Jeannie was proceeded in death by both parents, her husband Carl S Irvin, and a sister Jeri Jean Radford. Jeannie leaves to cherish her memories her Son Michael (Erica) Ellington Jr., Daughter Yolanda (Jerry) Brown. Grandchildren: Latisha Norris, Anthony Jones Sr., Autumn Jones, Jaylen Ellington, Mareyon Ellington, Destinee Brown, Jeron Brown, and Trenton Johnson. Great Grandchildren: Anthony Jones Jr, Emanee Edwards, Gia Lynn Bullock, and Conner Jones. Sisters: Hattie Temple, Helen Harper, Jackie Floyd, Marcia Worthington, Barbara Radford, and Corliss Maxey. Brothers: John Radford Jr, and Chester Radford. Uncles: Ronald Williams and Robert Charles Radford Aunts: Willa-Bell (Henry) Allen and Virgie Jewel and a host of nieces, nephews, cousins, and friends.

&#8220;House of Beauty This is Cutie&#8221; Ronna Jean Irvin was born to Anna-Bell Williams and John Wesley Radford on July 24, 1952 in Indianapolis, Indiana. Jeannie attended school #64 in elementary, she was a graduate of Emmerich Manual... View Obituary & Service Information

The family of Ronna Jean Irvin created this Life Tributes page to make it easy to share your memories.

“House of Beauty This is Cutie”
Ronna Jean Irvin was born to...

Send flowers to the Irvin family.