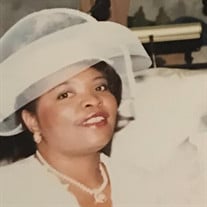 Mother Roxie Jean Johnson was born on August 23, 1952 in Indianapolis, Indiana to the Late Willie and Carrie Thompson. At an early age she confessed her love for Christ and accepted him as her personal savior, At Eastside New Hope Missionary Baptist Church. Then Later moved her membership to the Whole Man Ministries where she was a current member. Mother Roxie received her education in the Indianapolis Public School System. She Graduated from Arsenal Technical High School. Later she continued her education at the Indiana Bible College. Mother Roxie was united in marriage to the Late Lonnie Lee Johnson. Mother Roxie was employed at full beauty brands, formerly known as Redcats for 36 years. She was a trainer in the back -order department. Unfortunately shortly after retirement Mother was diagnosed with a terminal cancer called Multiple Myeloma. Mother Roxie was affectionately known by Jean to her family. She was the family cook for many year’s her Fried Chicken was always on the menu. Mother Roxie loved to have fun and would light up any room with her outgoing personality and was the life of the event. Mother Roxie found pleasure in serving the lord. In her early years she was the youth Director, Vacation Bible School teacher, Sunday school superintendent and a deaconess, she labored for many years at Eastside New Hope Missionary Baptist Church under the leadership of the late Pastor Robert P Webster. When joining Whole Man Ministries Mother Roxie continued to worship and praise God in Jesus Name and loved her church family. Mother Roxie loved shopping and spending time with her grandchildren making sure that they knew about God. Mother Roxie Loved Politics there was no need to watch the news just call her. Mother Roxie had a great sense of humor she and her grandson Cameron would put together a play in a flash where you could do nothing but laugh. Mother Roxie will be greatly missed by all who has the pleasure of knowing her. Mother Roxie received her wings and transitioned from this earthly life on January 21, 2021 at the age of 68. She was preceded in death by her Husband Lonnie Lee Johnson, parents Willie and Carrie Thompson, Brother Willie Thompson Jr., Sisters Mary White, Ethel Thompson and Janet O. Resse. She leaves to treasure her memories Daughters Camea Fields, Rocquel Johnson, Sons, Anthony Davis, Lonnie Johnson, Grandchildren Catrice Daniel, Camea Davis, Chantese Moore, Teyera Johnson, Trinidy Johnson, , Arianna Johnson, Zyelle Johnson, Cameron Moore Adrian Johnson, Taijawn Johnson, Great grand children Aunya Heater, London Daniel, Tyler Daniel , brothers Stephen Thompson, Randall Thompson, David Thompson, Sisters Rose Willis, Helen Mcbrady, Sandra Spearman, Carrie Keyes, Artist Montgomery, Best friend Delia Berryman

Mother Roxie Jean Johnson was born on August 23, 1952 in Indianapolis, Indiana to the Late Willie and Carrie Thompson. At an early age she confessed her love for Christ and accepted him as her personal savior, At Eastside New Hope Missionary... View Obituary & Service Information

The family of Mother Roxie Jean Johnson created this Life Tributes page to make it easy to share your memories.

Send flowers to the Johnson family.