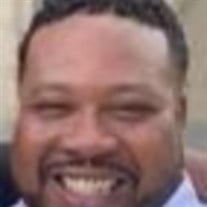 THOMAS DEBRENT ROBERSON was born on April 29th, 1982, in Indianapolis, Indiana to the late Fredrick R. Roberson and Angela J. Kendrick. He received his education from Arsenal Technical High School. Also received a culinary scholarship from Sullivan University in Louisville, KY. THOMAS accepted Christ as his Lord and Savior at Nu Corinthian Missionary Baptist Church. Growing up, Thomas loved playing video games and playing football, but cooking was his first love. Thomas enjoyed traveling, working, being a beloved dad and fiancé. He had the best relationship with his late mother Angela J. Kendrick. If she was rocking then he was rolling. She instilled Matthew 6:33 in both him and his brother Johnathan. That was one of his favorite scriptures and the Road to Salvation. THOMAS was employed at Odin Property Management as a Regional Property Manager for the last three years. In those three years Thomas excelled within in the company. He was tough but fair. Thomas created a strong, hard working team that became family. His line of work allowed him to help out the community in more ways than one. THOMAS was loved and known in his community. Unconditional love, heart of gold and always helping without asking for NOTHING in return but to do right. He had a passion for making people smile. Priceless smile. Thomas enjoyed spending time with his family, kids, and fiancé Audra. Ever since they met their family and territory grew. His outgoing personality and caring spirit will make him sorely missed. THOMAS transitioned on Tuesday, August 31, 2021. He was preceded in death by his loving mother, father, and grandparents. He leaves to cherish his memory his brother, Johnathan Davis, fiancé Audra Freeman; Children, Thomas Roberson Jr., Synea Roberson, Taleah Roberson, Sydney Roberson, Braylen Watts, Quincy Smith, Tysun Roberson and Torri Roberson and a host of family and friends. Thomas Debrent Roberson 39, passed on August 31, 2021. Services and visitation will be on Tuesday, September 14, 2021 at Nu Corinthian Baptist Church, 5935 W 56th Street. Visitation will be from 10-12 with services at 12pm. Interment will be at Sutherland Park Cemetery.

The family of Thomas Debrent Roberson created this Life Tributes page to make it easy to share your memories.

Send flowers to the Roberson family.