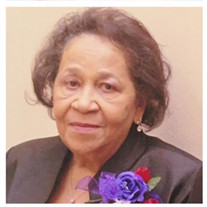 Virginia D. Bacon Turner was born on June, 6, 1933 in Cadiz, Kentucky to the parents of Edward J. and Alma Bacon, and was their youngest child. Virginia was educated through the Cadiz Kentucky Public School System. And relocated from Kentucky to Indiana around 1953. Virginia (GiGi) truly loved the Lord and accepted Christ at an early age. When she moved from Evansville to Indianapolis, IN she became a member at New Garfield Baptist Church, then Grace Apostolic Church. And last joined Greater St. James Missionary Baptist Church until the Lord called her home. Virginia (GiGi) was married to Ralph Morse in the presence of the Lord and they were blessed with eleven (11) beautiful children. And later in life she was re-married to Thomas (Tommy T) Turner for 32 years until his passing. Everyone knew Virginia Dare (GiGi) as a hard worker. While raising her children, she also worked and left a legacy at Standard Grocery Store, now known as Preston Safeway; where her co-workers, customers and neighbors found her as such a blessing to be around. Her sweet character lasted her entire lifetime. And her smile was contagious. Within her Community, when families lost a loved one, Virginia (GiGi) would call or go door to door, gathering a collection to provide for the grieving family. And make food dishes to show her love and condolences. Virginia (GiGi) departed this life on May 1, 2022 at the age of 88. She was preceded in Death by her spouse (Thomas Turner), her parents, daughter, grand-daughter, three (3) great-grandchildren, three (3) brothers, and two (2) sisters. She is survived by her children: Beatrice Bishop, Sabrena (Michael) Twyman, Chrystal (Norman I) Whitfield, Ralph K (Karen) Morse, Antwan Morse, Dawn (Kenneth) Barlow, Christopher (Yulunda) Morse, Stephen (Shelley) Morse, Sean (Lisa) Morse, Stacy Morse-Maitland. Roderick (Tiger) Turner, Tonya (Roosevelt) Crenshaw, Mark (Jennifer) Turner, and Pam Webster. Two (2) brothers, Leander Bacon and Marvin Bacon. An abundance of Grandchildren and Great-Grandchildren. And a host of nieces and nephews.

Virginia D. Bacon Turner was born on June, 6, 1933 in Cadiz, Kentucky to the parents of Edward J. and Alma Bacon, and was their youngest child. Virginia was educated through the Cadiz Kentucky Public School System. And relocated from Kentucky... View Obituary & Service Information

The family of Virginia Turner created this Life Tributes page to make it easy to share your memories.

Send flowers to the Turner family.