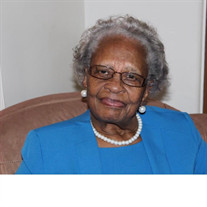 Mrs. Willie Mae Johnson White was born on October 29, 1930, to Ira and Elizabeth Johnson, in Panther Burn, Mississippi. She was the eldest of six children, and spent her school years in Trail Lake, Mississippi. She was affectionately called “Sister” by her siblings and close friends. At a young age, Willie Mae believed God, and on July 26, 1945, she confessed her hope and accepted Jesus Christ as her Lord and Savior. She attended church faithfully, and instilled Jesus in her family and friends. She later met her late husband, Pastor Phill White Sr., and they were married. From this union, they had nine children; four daughters and five sons. Willie Mae played many different roles and was important to so many people. She loved children, and even ran a daycare out of her home. She enjoyed cooking with her family and having family gather at her home. She loved plants, flowers, and simply spending time in her yard. Most of all she loved to serve. She was a faithful member and First Lady of Sunrise Missionary Baptist Church, which she and her husband founded. Obituary She later became a member of Community Missionary Baptist Church where she remained a loyal, and faithful, member for more than 40 years. While there, she served in many roles at the church. She was President of the Prayer Band, a Sunday School teacher, served in the daycare, and she loved to sing. Her dress attire was as graceful as she was. She always wore a fancy hat. Willie Mae was lovingly called “Big Guns” because she was such a powerful prayer warrior. She was a member until her health caused her to continue her worship from home. Willie Mae peacefully transitioned from labor to reward on Friday, September 3rd, 2021, at the age of 90 years, 10 months, and 4 days old. She was preceded in death by her mother and father, her husband, her brother, Andrew Johnson, her sister, Blanche Mitchell, her son, Donald White, and two of her daughters, Terry Howard and Georgia Holman. She leaves to cherish her memory and celebrate her life; daughters Bernice White and Cynthia White, sons Phill White Jr. (Brenda), Larry L. White (Michelle), Eric L. White (Karen), and Mark White Sr. (DeVona), sister Queen Bowman (Billy), brothers Donal Johnson (Michelle) and Ulysses Johson (Phyllis), and a host of grandchildren, great-grandchildren, and great-great grandchildren. Mrs. Willie Mae White's legacy is evident and continues to live on her family. Humbly Submitted, The Family

The family of Mrs Willie Mae White created this Life Tributes page to make it easy to share your memories.

Send flowers to the White family.